Review of Second Chance at Happiness by Greta Picklesimer 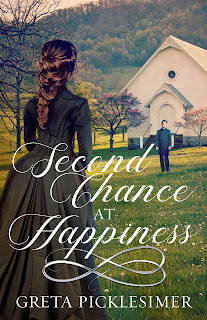 Historical Christian Romance
Description:
After Catherine Reed’s husband dies in a tragic logging accident, Catherine and her four-year-old daughter, Clair, move home with Catherine’s mother and brother in order to accept a new position as the teacher for the town’s one-room schoolhouse. But Catherine carries a dark secret that she hasn’t even shared with her mother. Will she ever find forgiveness?Samuel Harris has suffered his own loss, losing his wife and unborn child over a year prior. Although he is the town’s preacher, he struggles to trust God, blaming God for allowing him to be absent when his wife died. The guilt has burdened him ever since. But when his old flame Catherine Reed comes back to town, he wonders if they can find healing together.Catherine believes that anyone who wants to learn should be allowed to learn, but she is quick to find a town divided on that issue. As she and Samuel set out to change people’s minds in a post-Civil War era, they find themselves drawn to each other over and over again. As they join together for the same cause, could they also find a second chance at happiness?
Purchase
ABOUT THE AUTHOR
Greta Picklesimer is Michigan-born and raised by Kentucky-transplanted parents. She accepted Jesus as her Savior at the age of five—a happy day in her memory. Besides writing, Greta spends time working on her art journal, painting with watercolors and oil pastels. She is owned by one rescue cat by the name of Pearlie Blue who was named after her father's favorite Bluegrass song. By day Greta works as an office assistant. By night, she writes.
MY REVIEW
Catherine Reed and her daughter return home after her husband is killed in an accident. Catherine applies for a teaching job and finds out that a childhood friend is head of the school board and also a minister.

Second Chance at Happiness has a lot of circumstances that both Catherine and Samuel have to work through. Their past keeps them from moving forward. The story is filled with faith, learning to trust again, second chances, and forgiveness.

The characters are well-developed and I admired Catherine's resolve to go on even when things seemed dismal. She fought for what she believed in. Samuel is a strong character but has flaws.
The setting for the story with an apple orchard made it come to life and the vivid descriptions made me feel as though I was there with them. Highly recommended.
I received a complimentary copy of the book and a positive
review is not required. All opinions are my own.
Posted by J.E.Grace at 10:04 PM