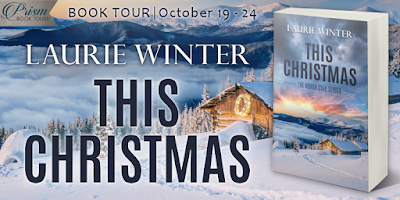 On Tour with Prism Book Tours
We hope you enjoyed the tour! If you missed any of the stops
you'll find snippets, as well as the link to each full post, below:
Launch - Author Interview

What inspired you to write THIS CHRISTMAS?

My pastor, an avid snowboarder, shared how much he enjoyed visiting Park City, Utah. His stories inspired me to dream up a suspense series set in a fictional ski village called Polaris. For THIS CHRISTMAS, I wanted to feature a ‘seasoned’ second chance couple with older kids, and the good and bad that come with an empty nest.
Read. Write. Love. - Excerpt
After closing his eyes, he reopened them and took a deep breath. Their Christmas tree was set up in the corner, filled with lights and family ornaments. Three stockings hung off the fireplace mantel. Grief and anger scorched his insides. Why had Kenna decorated for Christmas after he’d asked her to leave everything packed away? His late wife’s stocking, snuggled between Kenna’s and his own, ripped at his heart. I can’t breathe. The bright and cheery room blurred his vision. Christmas was no longer welcome in his house. How could he celebrate when his world had been crushed?
Hallie Reads - Excerpt
Christmas decorations were so prevalent, he wondered how many one person could own. A miniature Christmas tree sat in the entryway, filled with glass ornaments of a variety of foods. The Batista house burst with merry cheer—a stark contrast to his home. The smells drifting down the hallway from the kitchen reminded him of past holidays when he’d come home to find Maggie and Kenna elbow-deep in cookie dough and frosting. Pain pressed against his temples, and Luke blocked out the memories. “I’m here about Alex. You called and reported him missing?”
Splashes of Joy - Review
"This is such a fun story, a story that tells of difficulties in families, but love still flows through no matter what. . . . If you are looking for a good clean story to read during the Christmas holiday, this is a great choice."
underneath the covers - Excerpt
“I won’t stay long. As soon as I know she’s good, I’ll head back to town.” He blew over the top of the cup before taking another drink.

“No one will blame you for taking a day off.” She rested a hand on his arm. “Especially for your daughter.”

“I’ll take some time off once we find Alex and arrest the bad guys.” The corner of his lip lifted in a semi-smile.
E-Romance News - Excerpt
Out of the corner of his eye, he admired her beautiful face. Only a few fine lines were displayed on her otherwise smooth skin. She had striking cheekbones, and the rosy color filling the area below them gave her a youthful glow. Her good looks were well-developed—like a photograph, crisp and vivacious. “This might be a rude question, but how old were you when you had Alex and Marco? You don’t look old enough to have sons that age.”
QuirkyBookReads - Review
"It is well written with an creative description that paints a clear picture. The flow throughout is good with great character development. . . . I would recommend This Christmas as warm tale of finding love it is a good book [cozy] up in a blanket and read."
Becky on Books - Excerpt
Removing his hands from her hair, he rested one on each cheek, gently cupping her face.

The smooth touch of metal on her skin made her jerk away. She didn’t have to see his left hand to know he still wore his wedding ring. She struggled for breath and the right words, finally pulling away.
Books & Benches - Excerpt
Celia bit her tongue, knowing how strongly Luke disliked Kenna’s interest in welding and art. But Kenna was at an age when she had her entire life spread out before her. She could take chances, and someday soon, she’d fly. “She’s a good daughter. You’re right, though, about her not being with you forever. I come home to an empty house after school, and sometimes, the quiet is more unnerving than when I’d walk into a house full of fighting boys.”

“I’m fine with being alone.” Luke’s blue eyes darkened, turning the color of the sky at twilight.
Jorie Loves A Story - Excerpt
“Dad test?” Kenna set down the piece of copper on the workbench in order to pet her dog, whose large frame sat on her feet. “Do I even want to know?”

“I’m a cop and a Marine veteran. No, you don’t want to know what I have planned.” Luke walked over to the old radio and turned up the volume. A modern country melody filled the space. “If you were back at Stanford, you could date without interference from your overprotective dad.”
Book Lover in Florida - Excerpt
After reading for about forty-five minutes, Celia’s eyes grew tired. A large cup of coffee from the lodge café would rouse her. Just as she was about to stand, a tall man wearing a beaten Stetson entered through the lobby’s front doors. At the sight of Luke Veldkamp, her breath hitched in her throat and her body went on high alert. If her heart didn’t slow down, she might end up with a cracked rib. She lightly pressed her fist on the hallow of her chest in an attempt to calm her heart rate.
Wishful Endings - Review
"THIS CHRISTMAS is a story of letting go of grief and learning to open your heart again. It's about family loyalty. It's also about fighting for new beginnings and love. An overall sweet story for romance lovers."
Lisa's Reading - Excerpt
Downtown Polaris was bustling with activity. Most of the small shops on Main Street had closed for the night, but the restaurants and bars were well lit and drawing large crowds of tourists. Strands of Christmas lights hung on every building, and a massive, decorated pine tree was placed at the entrance to the city park. The holiday cheer mocked him. He calculated the cost of electricity. So many better ways that money could be put to use.
Christy's Cozy Corners - Excerpt
Celia went through the entire store, showing every worker Alex’s photo and asking if they recalled seeing him yesterday. Each Alpines associate was friendly, but none had remembered her tall, dark-haired son. For as busy as the store was, she didn’t blame them. But all she needed was one person to have paid attention to Alex yesterday. One person who’d spoken with him or remembered him leaving the store. Each second she wasted hunting down clues delayed finding her son. Alex could be stuck somewhere, injured and waiting for help.
Bookworm Lisa - Excerpt
Celia strode away from Luke and toward Andrew. How could she have gotten swept up in her longing for affection and passion that she almost let herself fall for Luke Veldkamp? His heart and soul were as boarded-up as a beach town during a hurricane.

“What’s he doing here?” Andrew scowled. “And why is your face so red, Mom? Maybe you should sit. You look ready to fall over.”
I'm Into Books - Excerpt
Back inside his truck, he caught a whiff of Celia’s floral scent. His blood warmed in response, and his chest tightened. Focus on your job. Which, as of now, was Celia. And his mind looped back to her.

The roads in town had been cleared, but as soon as he reached the mountain pass leading to the cabin, conditions grew worse. His four-wheel-drive truck struggled in spots, and he drove slow and steady. The last thing he needed now was to send his truck, along with himself, over a cliff. Normally, the trip took about forty-five minutes. Today, he white-knuckled it for an hour and a half before reaching the driveway to the cabin.
Harlie's Books - Review
"It’s a beautifully written book about dealing with loss, new love, and realizing that your adult children aren’t children anymore. . . . The suspense part of the book is top-notch. It is what drives the plot. Plausible and tension-filled at times but not over the top. Ms. Winter does an excellent job of keeping the tension up while keeping the book character-driven and the potential romances in the front. She blends it seamlessly for me as a reader. You know me, I’m a huge romantic suspense reader so for an author to do that, I’m hooked."
Teatime and Books - Excerpt
“You lost him so young.” Kenna rested a hand on her shoulder.

“Yes, he was.” Celia wondered how he’d look now, if he’d lived to see his forties. Would his hair have turned silver early, like his dad’s? Would he have had to work out to keep the extra weight from creeping on, like she did, or would he have kept his youthful metabolism? “Luis and I didn’t wait for someday. We had a good life together, even if it was too short.”
brittreadsalattebooks - Spotlight
Heidi Reads... - Excerpt
Her heart beat increased in speed, along with her running pace. With fumbling gloved fingers, she reached inside the hoodie pocket for her cell phone. It slipped out of her grasp and onto the ground. She skidded to a stop and picked up her phone with a trembling hand. The sound of heavy breathing made bile rise in her throat. If she didn’t make it back to the beginning of the trail and out into the open soon, she might never get back.
Rockin' Book Reviews - Review
"This is a super story. I loved the intrigue and mystery in the story. I like the family dynamics with Celia and it was interesting to follow Luke's emotional ups and downs. . . . I highly recommend this story to those who enjoy mystery and great romance."
Don't forget to enter the giveaway at the end of this post... 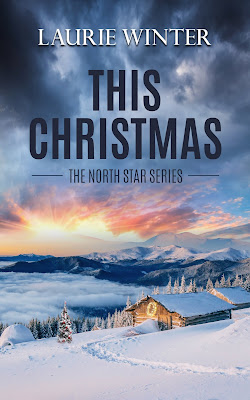 'A beautiful story of loss and new love, set in a snow-capped mountain ski resort town.'

Celia Batista waited a long time for all three of her sons to be together for Christmas. But after one of her identical twins disappears without a trace, Celia must rely on Police Captain Luke Veldkamp for help. Despite Luke’s accusations that her other twin son is involved with organized crime, she falls for the handsome, Stetson wearing cop.

Luke Veldkamp is facing his first Christmas after the loss of his wife, working nonstop to avoid the holidays and his grief. His daughter, who’d moved home to care for her mom before her passing, pushes him to face his pain. Luke pushes back, telling her to return to college and regain her own life. If his own strife isn’t enough, the mission to locate the missing son of his beautiful neighbor grows more personal than any other case.

While Luke and Celia fight to keep their families from falling apart, they find comfort and strength in one another. And when love blooms between their children, Luke and Celia’s own relationship takes root and grows. But Celia is used to living on her own terms, and loving a man who has isolated his heart is a risk too great. Now, Luke must either confront his emotions or face a life without the woman he’s come to love. 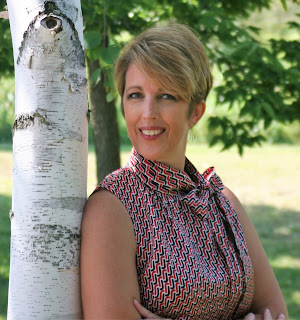 Laurie Winter’s head has always been full of stories. Then a dream gave her the inspiration to put her thought into written words, sharing a part of her heart and soul. Now, she creates authentic characters who overcome the odds and find true love. She lives in Wisconsin with her husband, daughter, and rescue dog. Please connect with me on Facebook, Twitter, Instagram, and Bookbub. 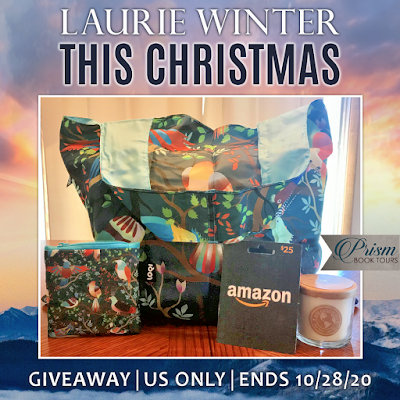 One winner will receive a Loqi Reusable Shopping Bag with birds design, Soy Wax Candle - Snowflake and a $25 Amazon gift card (US only)
Ends October 28, 2020