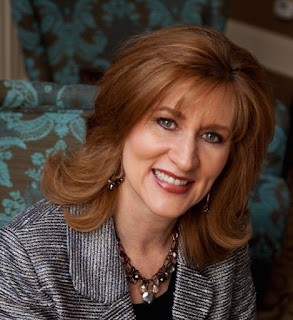 Tamera Alexander is the USA Today bestselling author of Rekindled, Revealed and Remembered, the critically acclaimed Fountain Creek Chronicles historical series. Her second historical series, Timber Ridge Reflections (From a Distance, Beyond This Moment, and Within My Heart) continue her signature style of deeply drawn characters, thought-provoking plots, and poignant prose which has earned her devoted readers worldwide—and multiple industry awards.

Her books have been honored with four Christy Awards for Excellence in Christian Fiction (she's an eleven-time finalist) and have twice earned the distinction of the RITA Award for Best Inspirational Romance (Tamera is a six-time finalist).

Her novels have won two Carol Awards, the Gayle Wilson Award of Excellence, the Golden Quill Award, the HOLT Medallion, the Bookseller’s Best Award, the National Reader's Choice Award, and Library Journal’s Top Christian Fiction, among others. Tamera's books have been translated into Dutch, German, Polish, Romanian, Slovakian, and Portuguese.

Tamera lives with her husband in Nashville, Tennessee, not far from the Southern mansions that serve as the backdrop for many of her critically-acclaimed novels.

Tell me about yourself. What got you started writing?

I first considered writing a novel in 1999. But I need to go back a bit farther to really get to the “seed” of where all this started for me. In 1995, my mother-in-law, Claudette Harris Alexander, shared a book with me, one she thought I would really enjoy. I was busy and let time go by without reading it. She asked me again if I’d read it. Several times. I said no, but that I would. The best-laid plans, as they say.

Very unexpectedly, Claudette died that same year from a brain aneurysm. Weeks passed, and as I was cleaning bookshelves downstairs, I happened across that little volume and immediately sat down and read it. Claudette was right!

I felt an immediate connection with the thread of hope woven through that gentle love story—Love Comes Softly, by Janette Oke, originally published by Bethany House Publishers in 1979. That sent me searching for more inspirational fiction published not only by Bethany House but elsewhere in the Christian Booksellers Association market (CBA). I devoured it and developed a strong interest in historical fiction.

A handful of years later my husband and I were driving back to Colorado from Texas late one night. I finished a novel, turned to him, and said (only joking at the time), “I think I could write one of those.” Without blinking, he said, “Well, do it.” Competitive at heart, I nodded and said, “Okay!”

My first novel made it to the review board at Bethany House Publishers in 2000, after which I received a very nice rejection letter. Writing that first story was a learning experience for me that I took to heart. I then determined to set about seriously studying the craft of writing. And all these years later, I’ve just published my 17th novel.

How did you come up with your book idea? What inspired you?

Ideas for my novels typically stem from a question I’m wrestling with, a spiritual struggle perhaps—and real history. Real history is always involved. All of that is true for Colors of Truth.

The theme of truth runs throughout this story. And also lies. Lies told to us. Lies we tell ourselves. Lies we tell others. We live in a time when integrity and truth seem hard to come by. God met me on the pages of Colors of Truth and drew me closer to him through the characters’ struggles. I hope readers experience the same.

I wrote this book during the last year of my father’s life here on earth. Dad had a ten-year journey with dementia and passed in August 2019. So much of what we experienced together, of what dad (and also my Heavenly Father) taught me during those last days, weeks, and months made it onto the pages of Colors of Truth.

The never-failing love of both my earthly father and Heavenly Father got me through.

I love them all yet feel a special closeness to Wade and Catriona because I wrote the story in their POV. But I have to say that Tempy’s character first captured my heart when I wrote Christmas at Carnton (a Carnton novella) and With This Pledge (Carnton book 1). Tempy’s character is based on the real African American woman who served as the cook at Carnton for the McGavock family for the majority of her life.

I also love Nora’s character. I’ve always wanted to write a story with sisters, and that Catriona and Nora are Irish made writing it especially enjoyable. I’m currently writing the third and final Carnton novel which will release Summer 2021, and the heroine? Nora, all grown up!

Do your characters (or message) ever seem to have a life of their own or agenda?

Oh gracious yes. I’m often surprised when something happens in the story I’m writing. My husband always shakes his head (when I tell him this) and counters, "But you’re the author. You know what’s coming!" But as I tell him, these characters are "living, breathing people" who just happen to live inside me. They have minds of their own.

As far as the message of the novel, I rarely know that until I’m well into writing the book. Sometimes not until the first draft is completely written. Then in the rewrite, I go back and strengthen the story and character motivations in that regard.

God met me at so many turns in this story. But the ultimate truth that he engraved on my heart as I wrote Colors of Truth is to tell the truth. No matter the cost. Always. That means telling the truth to myself, to others, and to him. Because he IS truth.

Seventeen. All historical fiction/romance. Seven written against the backdrop of Colorado history, ten written about real Southern history. The ten Southern novels are set against the authentic history of three antebellum mansions in Nashville—Carnton, Belle Meade, and Belmont—and the people who lived and worked there.

What authors in your genre inspire you most?

There are so many authors I read who inspire me, who I learn from, that I hesitate to name a handful and leave others out. But I’m grateful for each one! I will say that I’m especially excited about a favorite novel Redeeming Love (by Francine Rivers) coming to the big screen in 2021. Wish we could do a massive "girls night out" and all go see that together!

What would you tell a beginning author who wants to publish but doesn’t believe he/she has enough talent?

Every "no" along the way is really part of God’s final "Yes!" when his perfect timing is reached. Never. Give. Up. Keep honing your skills and seeking his will. 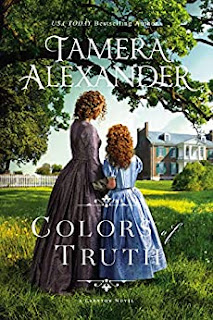 In a town battered and bruised by war, one woman embarks upon an impossible search--and one man must face the past in the very place that almost destroyed him.

Tennessee, 1866. According to the last letter Irish immigrant Catriona O'Toole received from her twin brother, Ryan, he was being dispatched to Franklin, Tennessee, whereas a conscripted Confederate soldier--he likely endured the bloody Battle of Franklin that claimed the lives of thousands. Catriona leaves behind the lush green of their Irish homeland in search of him, with nothing to her name except the sum of cash Ryan, sent to their family. Now the sole provider for her seven-year-old spitfire sister, Nora, Catriona hopes to reunite the siblings--the only surviving members of their devastated family.

Wade Cunningham is a former Federal soldier who now works for the newly formed United States Secret Service and is trying to uncover counterfeiting rings in the postwar South. In order to infiltrate their sophisticated enterprise, he must pose as a former Confederate in Franklin--a town where counterfeit greenbacks run rampant. When Wade meets Catriona, he is immediately intrigued by her and the little redheaded scamp in her care--but what he doesn't anticipate is that the cash in Catriona's possession is some of the most convincing counterfeit money he's ever seen. Soon the object of Wade's affection is also the suspect in a major crime--one he's expected to prosecute.

The Carnton novels are standalone novels, meaning they are part of a series but can be enjoyed individually. 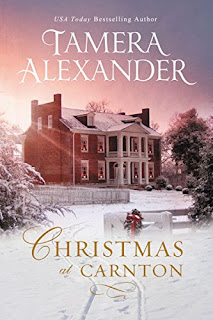 Christmas at Carnton, a novella 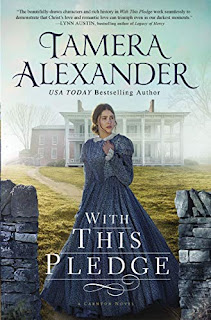 With This Pledge, Book 1