National bestselling and award-winning author Joanna Campbell Slan welcomes your emails! You can contact her at JCSlan@JoannaSlan.com with your comments and questions.

Joanna writes books that feature spunky female characters. Her work has been praised by Library Journal as "topically relevant and chock-full of side stories." Publisher's Weekly calls her cozies, "a cut above the usual craft-themed cozy."

National bestselling and award-winning author Joanna Campbell Slan welcomes your emails! You can contact her at JCSlan@JoannaSlan.com with your comments and questions.

Joanna writes books that feature spunky female characters. Her work has been praised by Library Journal as "topically relevant and chock-full of side stories." Publisher's Weekly calls her cozies, "a cut above the usual craft-themed cozy."

RT Book Review describes one of Joanna's typical heroines as "our best friend, our next-door neighbor and ourselves with just a touch of the outrageous."

In her ongoing quest never to see snow again, Joanna lives with her husband and their Havanese puppy, Jax, on an island off the coast of Florida.

Tell me about yourself. What got you started writing?

I grew up in an abusive environment and books offered the perfect escape, as well as a vision of a better life. From reading, it was a short hop to writing. Even as a little kid, I would staple papers together and tell people, “This is my book.”

How did you come up with your book idea? What inspired you?

Actually, I didn’t come up with this book idea! It was the brainchild of CJ Lutton, a talented man who died three years ago. He left behind several Sherlock Holmes books that (I felt) deserved publication. One book had a bifurcated plot, so I divided it into two books.

CJ had chosen the title, which is a reference to a comment Sherlock Holmes made about a story the world is not yet prepared to hear. That was a clue. The problem posed in the book had to be big enough and important enough that Holmes thought it could damage the British public’s trust in its institutions. I wondered, “What would be so dire?”

Of course, the Sherlock Holmes books are set in a certain era, the late 1800s up until the first decade of the 1900s. That meant, the problem had to be true to that period. At first, I was well and truly stumped. So I did what I often do when I’m stuck, I took the book apart, piece by piece. And I studied each individual portion. I researched all the places, ships, politicians, issues, social problems, and so on of the times. Slowly an idea formed: What if three shipwrecked boys agreed to be turned into wolves once a month as a way to save their lives and the lives of people they care about? What if the British government found out—and decided to capture the boys to replicate their “illness” and breed exceptional warriors?
And away I went!

What was the most difficult part of writing this book? How did you overcome this difficulty?  CJ had left behind a compelling scene set inside the Bethlehem Hospital (Bedlam). I wanted to use it, but I had to fit it in so that it made sense. I overcame that problem by having Holmes plan a daring escape from this notorious insane asylum.

Who is your favorite character from the novel? What about them makes them your favorite?  I like Dr. John H. Watson, Sherlock Holmes’ sidekick. He’s so human! He’s a gentleman, a smart fellow, and a loyal friend.

Do your characters (or message) ever seem to have a life of their own or agenda?  On occasion, my characters surprise me. That’s important because it keeps me coming back to the keyboard to see what happens next.

I’ve written non-fiction, historical fiction, and cozy mysteries. This book gave me the impetus to tackle a thriller. My editor was pleased with the end result. She called it “one heck of a read.” I hope readers will enjoy this book, too. I’m proud of it!

I have a spreadsheet that shows I have 80+ projects. I don’t know if you count box sets separately, so it’s pretty confusing. I’m not sure that the number matters anymore.

The genres are: non-fiction (self-help, how to, coloring book, cookbook, personal essays, how to be a better public speaker) and fiction (historical fiction, historical fantasy thriller, and contemporary traditional mystery).

I love taking an idea and seeing where it will take me. My motto is “dwell in possibilities,” which is a quotation from Emily Dickinson. I can’t wait to get writing every day. It’s like reading a book, but I get to decide how the story goes. What could be better than that?

My least favorite is finding errors. That’s not the same as proofreading. Errors can be complex problems like too many days in a week, or timing mistakes. Silly stuff that’s a pain in the backside. But…it’s an important aspect of my readers’ enjoyment.

What authors in your genre inspire you most?  Charlotte Bronte, Daphne du Maurier, and Agatha Christie—gosh, there are tons of authors I admire.

What would you tell a beginning author who wants to publish but doesn’t believe he/she has enough talent?  I would urge the beginning author to read every day, to run toward criticism instead of away from it, to study craft, and to keep writing. Most people give up too easily. In fact, I’d say that if you give up, this probably isn’t the right profession for you. In my humble opinion, the best authors are driven to write. It’s not a choice.

I’m sure there are people out there who don’t think I have enough talent. So what? I’m not going to let them define my life. That’s putting waaa-aay too much power in the hands of other people. I plan to keep on writing and to get better at what I do every day with every project. 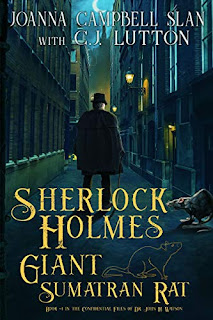 The fourth book in a new series featuring Sherlock Holmes and John Watson, written by a USA Today and Amazon Bestselling Author.

The world was not prepared for this story, a conspiracy hatched in the highest levels of the British government. A rogue Minister of Defense plans to turn soldiers into blood-thirsty animals—and Holmes and Watson may be among their first victims.

The adventure starts when Holmes is warned away from investigating Jack the Ripper’s heinous crimes. Despite Holmes’ well-known skills, he is sidelined. He must content himself with a straightforward case, finding a bolting beau, the result of a simple lovers’ quarrel.

But that “romance gone wrong” is really the key to a nasty secret with tendrils reaching all the way to a Sumatran island. That’s where four castaways made a difficult decision. They turned their backs on a society that sent them packing and allowed themselves to be infected with a deadly virus. After all, they never expected to ever come home again… And they certainly never expected to be considered lethal weapons! Can Holmes and Watson stop them from being used for evil purposes?

This fast-paced adventure will take Holmes and Watson from the dregs of London to its noble heights. The two friends will travel from Bedlam, the hospital for the insane, to stately Windsor Park. Sherlock Holmes and the Giant Sumatran Rat is a fast-paced thrill ride that’s sure to keep readers on the edge of their seats. If you like historical thrillers with a hint of the supernatural, you’ll love this series. Each book stays true to Sherlock Holmes and his faithful friend, John Watson, whilst featuring a cast of real people and issues pertinent to the times.

This series is perfect for fans of Laurie R. King, Preston Child, and Joanna Penn.